Review and forecast for treasury bonds and TLT

The big-picture pattern in treasury bonds has been working well for several years and has allowed us to predict some major inflections. There are however signs that treasuries and the iShares Barclays 20+ Year Treasury Bond ETF (NASDAQ:TLT) may be ready to move into an entirely new phase. Here we take a quick review of our performance with TLT in 2016 before considering where treasuries should go next.

During the earlier parts of 2016, we emphasized that treasuries could still go higher, but warning signals of a sell-off were building. In March, we noted an unusual type of divergence between bond prices and yields that is usually followed by a reversal, and we suggested that betting on prices to go higher was like playing a game of chicken with the Fed.

In June, the possibility of pattern completion made it reasonable to ask whether the tops had been reached in bonds and TLT, even though there was not yet any confirmation of a downward reversal. For most traders who include Elliott wave methods in their toolkits, this would have been a clear signal to exit from any remaining long positions even if there was a chance of price reaching higher.

TLT went on to make a new high in July, but by September there were clear signs that the rally was on the verge of failure. We identified some resistance areas that would make attractive entry points, and even though the wick of a single weekly candle poked above our areas, the week closed near the resistance we had projected at 137.60.

By December, the expected decline was well under way, and we suggested some areas where traders might consider protecting their profits if they had shorted the move.

Our line-on-close monthly chart for treasury bond futures shows how price recently made its first break below the channel that had contained the ending-diagonal pattern for several years. It is reasonable to expect price to test the lower channel boundary as resistance one or more times before the decline resumes in earnest, which suggests there could be some back-and-forth action among the Fibonacci-related levels we have drawn on the chart.

In the near term, a brief continuation of the decline in treasuries could produce a test near 147^16 or even possibly 141^00 before a larger bounce takes effect. However, we expect those supports to fail sometime in late 2017 or early 2018, leading to an even stronger decline. 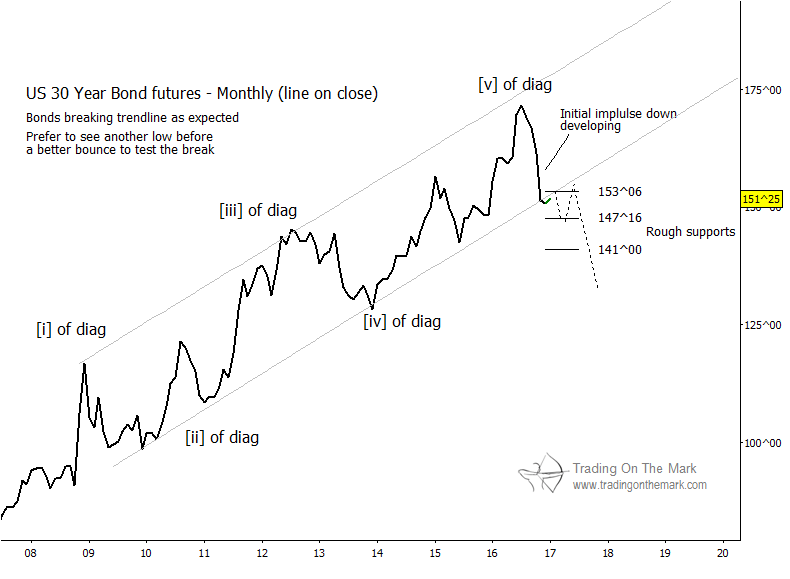 The ETF should follow the same basic script as bond futures, even though the pattern looks slightly different. TLT has not yet broken beneath the lower boundary of the diagonal pattern, but we believe it will do so eventually. In the meantime, watch for possible bounces from the boundary itself and from Fibonacci-related supports near 114.30-114.80 and 110.90. 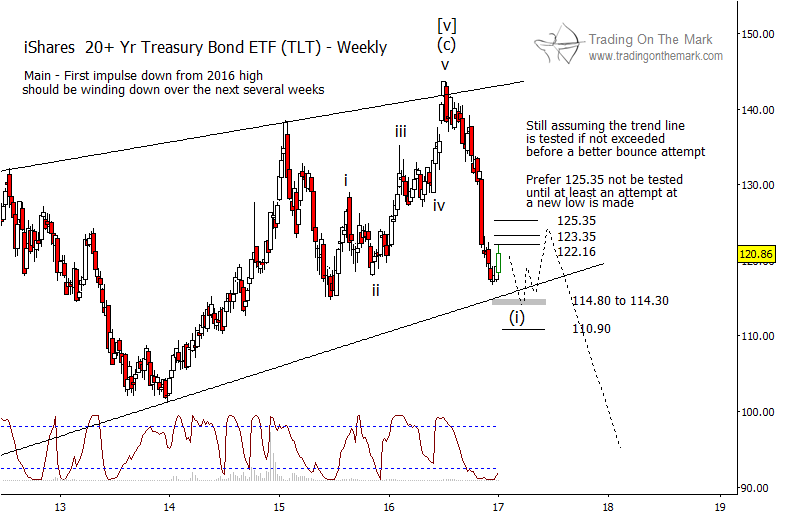 A near-term decline into support probably will complete downward wave (i) of what should eventually become a large five-wave sequence. A bounce in wave (ii) could then last through the middle part of 2017 or longer, and a declining wave (iii) should trace a move that is at least as powerful as the decline we saw last year.

If you’re an active trader, this type of charting can be your guide to finding good entries and exits. In fact, new subscribers can get a full month of access to all the services we offer in our Daily Analysis and our Intraday Analysis for just the cost of the Daily Analysis alone. Give it a try, and see which service level works best for you.