Three months ago, our post at InsideFutures showed how the U.S. Dollar Index might be preparing for a strong upward move as part of a larger upward trend.

We also suggested that the index might need to put in a small second-wave correction before resuming its climb. Now there are signs the small correction might be complete.

After our last post, the index tested and retreated from resistance near 95.79 before making a shallow retrace to find provisional support near a Gann-related level at 93.64.

A decisive breakout and weekly close above 96.51 would strengthen the case that upward wave (iii) or (c) has begun. If that takes place, an approximate target for the next stage of the pattern lies near 102.12. 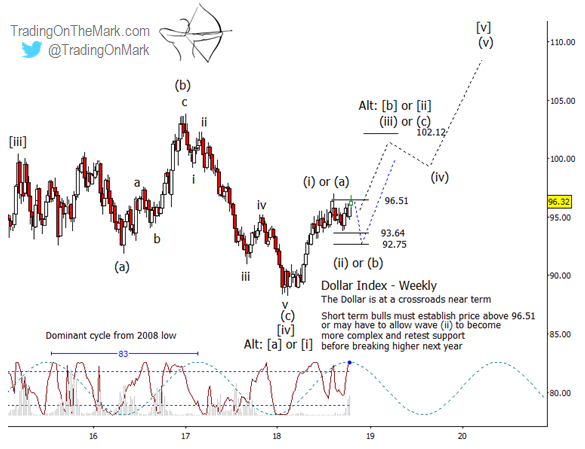 In volatile conditions, traders of all experience levels can benefit from charts that show the areas where turns are more probable.

Trading On The Mark helps subscribers stay on top of the moves with twice-daily updates for the Dollar Index, Euro futures, the S&P 500, crude oil, treasury bonds, and gold.

On the other hand, a near-term retreat from the resistance level would probably accelerate to bring the index close to the lower Gann support at 92.75. That would make for a more lengthy, complex wave (ii) or (b).

It’s common for currencies to put in a trend change around the turn of the year, and that tendency strengthens the case that the Dollar Index might need to spend a few more months in consolidation. For that reason, we have some preference for the near-term bearish scenario that could lead to a test of 92.75.

If the early part of 2019 brings a new upward trend from one of the support levels, it would be reasonable to expect that trend to continue until the next inflection of the 83-week cycle in mid-summer 2019.