In our July 2019 post about the Invesco DB US Dollar Index Bullish Fund (symbol UUP) we wrote that price was trying to bounce from the highest of our supports at 25.90. That bounce worked well, and it produced a rally that exactly reached our middle resistance target at 27.17 in late September.

The fund continues to respond well to the extension targets and retracement levels that would be consistent with a bullish Elliott wave scenario, but we have had to modify our main count in consideration of the deep retrace that printed during the past three weeks.

We view the current retrace as the prelude to a strong move higher.

The revision to our main count has the price high of September 30 as the completion of upward wave (i) of [v]. Basically we have shifted the placement of (i) rightward in comparison to the July chart.

That sets the stage for the current retrace being all or part of a wave (ii) correction. It is already possible to count a three-wave structure in the retrace, so it may be nearing completion.

We expect this year to produce considerable volatility in several of the markets we follow. A Daily Analysis subscription at TOTM gives you weekly and twice-daily chart updates for the Euro, gold, crude oil, bonds and the S&P 500, plus daily updates for the Dollar Index. Intraday Analysis offers additional moment-by-moment coverage. You can learn more about subscription options here.

Note also that we are now very near the inflection of the empirical 100-week price cycle, and the Lomb periodogram also flags the current timing as a low. 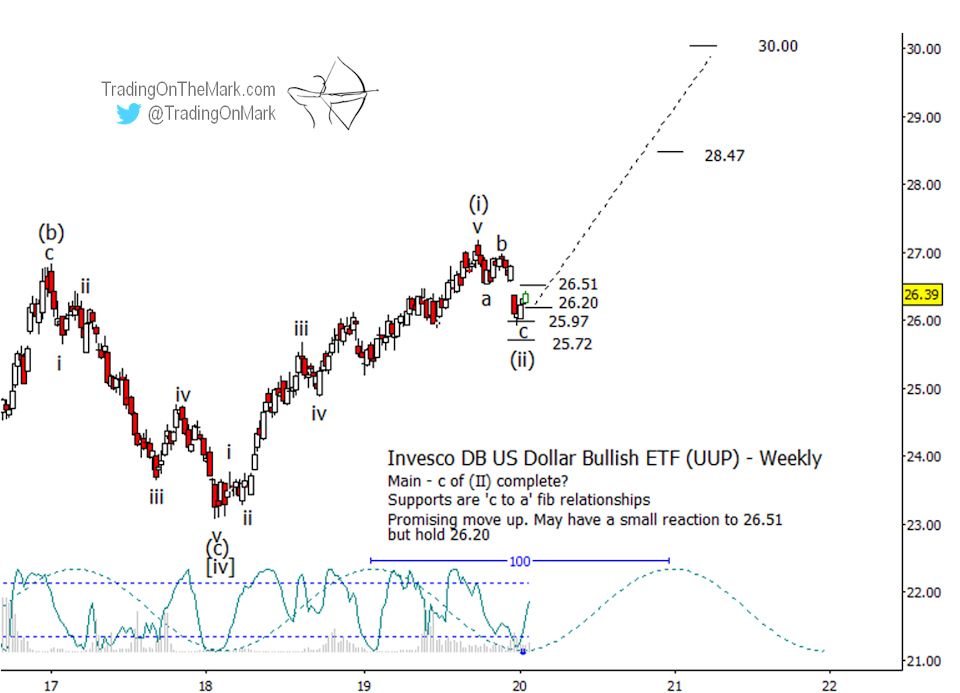 Fibonacci relationships among the sub-waves inside (ii) offer near-term support targets at 26.36, 25.97 and 25.72, with the middle one being tested now. A rebound from the middle support as part of upward wave (iii) should aim for targets roughly near 28.47 or 30.00 – measurements that are based on the magnitude of wave (i).

At the end of the January 20-24 week, price closed slightly above the first resistance level it needed to take out in order to favor an upward break. The next important near-term resistance sits at 26.51, which could produce a small wave ‘ii’ pullback.

As Elliott wave readers know, third waves are typically the strongest ones. Ideally we would like to see upward wave (iii) reach at least a 1x1 relationship with the preceding wave (i), which makes 30.00 a reasonable target. However it is quite possible that the fund could reach higher than that while still in a third wave.

Following the Dollar Index and UUP can give traders a real edge in catching currency moves. At Trading On The Mark, the Dollar Index informs much of our analysis of the Yen, the British Pound and the Euro.